The Holy Imperial Russian Orthodox Church is an autocephalous reestablishment of the true Imperial Church of Rusland that existed before the fall of the Russian Tsars in 1917. Based on more than 1,000 years of tradition, our church wishes to reawaken the image of Russian Christianity founded upon the inspirations of Tsar Peter the Great, whose current heir, Mikhail Ivan Freyovich Yngling-Romanov {Tsar Peter Alexander Mikhailovich Romanov}, is the first to appoint a Patriarch to the Imperial Church since the 18th Century. With this authority, his Blessed Highness has also established a true Patriarchate to govern the spiritual matters of the church.

So far as we know, we have the first Patriarchate established in the Independent Sacramental Movement that flows from a valid historical tradition.

The genealogical research for our Holy and Blessed, Velikiy Knaiz was initiated many years ago by his birth mother, Elvira Juliette. Her research was conducted before the invention of the internet and required many visits to old churches and libraries in most of the countries in Western Europe. Her efforts were concentrated primarily upon the Yngling Dynasty of Scandinavia [for this family tree is well preserved] and its spread into the royal families of Europe. While extensive genealogical connections were reported to the monarchies of England, France, Germany, Austria and Switzerland, these family trees are not of primary importance. Recently, using available internet sources, we have verified and greatly expanded the scope of the genealogical work of Mikhail Ivan’s mother. The combined data is shown by the accompanying charts (see below) pertaining to the line of descent of His Blessed Highness.

Elvira Juliette reconstructed her husband's ancestry via oral interviews with Mikhail Igorovich’s mother and other Russian relatives immigrating to the United States after the assassination of the Romanov family. The pedigree chart derived from these interviews is presented with this short introduction, but we have found it impossible to verify through any existing birth or historical records listed on the internet for the Polyakov woman who bore a child from Alexander I in 1826.

However, while on a trip to St. Petersburg a few years back, we did have a chance to compare the facial features of Mikhail Ivan’s eldest son, Prince Aleksander IV, with paintings made of his reported ancestor, Aleksander I. We have included one very telling picture with this report demonstrating great similarity between the facial and body structures of both individuals. Some persons known to us who are knowledgeable in matters of reincarnation, via ecumenical symposiums of the Vajrayana and Qabalah, upon being shown the pictures, have given us their opinion that Aleksander IV is the reincarnation of Aleksander I. Whether or not this is actually the case is of no genuine concern to us, it is our opinion, however, that such physical evidence is sufficient to state officially that the Polyakov-Romanov family oral history is accurate as portrayed.

If you refer to the genealogical charts included with this report, you will see that Mikhail Ivan’s ancestors can be traced back quite easily into politically-based marriages arranged between Patrician families of the Roman Empire and the Vandal royal families. In fact, it is clear that Mikhail Ivan’s family tree flows directly into the great emperors of Rome, including Constantine the Great, Marcus Aurelius and Trajan.

Lineage to Constantine the Great is of particular interest to us for his mother was Saint Helen of the Cross and he decreed that Christianity would be the new official religion of the Empire.

Following forward the descendants of Constantine the Great, we will arrive at the Viking King, Halvdan Olavsson “Hvitbein”. He had a number of children whose descendants eventually coalesced into Olav Godfredsson, King of the Isle of Man and onto our Grand Prince.

His son, Oystein Halvdansson “the Mild” is the forefather of a princely family who was invited to rule over the Slavs near Kiev, Ukraine in the late 800s. The first Norwegian Prince to accept this invitation to rule was Riurik Hemmingsson. The Riurik Dynasty ruled all of Russia until the 1600s with the death of Tsar Feodor Ivansson II without issue. No other Riurik would agree to take the throne and eventually was given to Mikhail Romanov by vote of the nobles.

Mikhail Ivan is also a descendent of Riurik via Yaroslav the Wise’s daughter who was married and bore children to Harold III of Norway.

Based upon sound genealogical research, it is clear that Mikhail Ivan royal lineage is more extensive than any other claimant to the throne of all of Rusland or Russia, including the Ynglings, the Riuriks and the Romanovs, and so is the natural choice to rule should Ukraine and Russia decide to return to a monarchy.

His lineage also provides him authority to make changes in the original Kievan Rus church initiated by Vladimaar I of Kiev Rus, including modification of the responsible Patriarchy.

Below you will find the genealogical charts representing the descendants of His Blessed Highness Mikhail Ivan Freyovich Yngling-Romanov {Tsar Peter Alexander Mikhailovich Romanov} who has reestablished the true Patriarchate of the Holy Imperial Russian Orthodox Church.

(Note: Please click one of the charts below to view. Lessor familial connections have been excluded in the interest of clarity.

Descendants of Constantine the Great of Rome Chart

We have published a preliminary site for the Holy Imperial Russian Orthodox Church. Please feel free to explore it at:

Our Formal Position on the Esoteric Arts & Sciences

Paragraph 2116 of the Catechism of the Catholic Church states: “All forms of divination are to be rejected: recourse to Satan or demons, conjuring up the dead or other practices falsely supposed to "unveil" the future. Consulting horoscopes, astrology, palm reading, interpretation of omens and lots, the phenomena of clairvoyance, and recourse to mediums all conceal a desire for power over time, history, and, in the last analysis, other human beings, as well as a wish to conciliate hidden powers. They contradict the honor, respect, and loving fear that we owe to God alone.”

In other places throughout the Catechism, the Church of Rome offers similar reactions to such practices. The HNCC, however, feels that the teachings of the Church of Rome only stand to apply as far as to one who is uninitiated into the solemn Mysteries of Christ. Alternatively, if someone has reached a certain level of epignosis, that individual’s spirituality will eventually demand that such an individual grow and evolve. Occasionally, this will manifest as a profound need to move beyond the convention of one’s tradition for an undisclosed period of time. Inasmuch as this phenomenon occurs, the HNCC feels its responsibility is to guide such a person through the western magical tradition (or any other spiritual tradition), rather than condemn it, reject it, or warn against it. Although, let it be known that we decidedly maintain that general occultism and mystery traditions offer considerably less esoterically than what has been preserved (largely in secret) by the Christian Church in its two-thousand year history. Realization of this fact, however, is often obscured until one engages the mysteries contained within other available traditions, even if those other traditions are grossly incomplete. While we contend that the Mysteries of the Church are comprehensive and exceed any need for other systems, we understand that a solid spiritual foundation is largely dependent upon willful exploration.

Our tradition has approved an "extraordinary form" of Baptism which offers the Sacrament freely to the adult in the same manner as the Sacrament is given to an infant. Ultimately, it is our hope that all individuals that come to us for Baptism choose to become fully initiated into the Mysteries as catechumens, however, we feel that unbaptized adults are greatly in need of the Grace Baptism provides regardless of that adult's particular commitment to the Church.

Any individual that has been deprived of the Sacraments for an extended period of time is at great spiritual risk. To further place at risk such an individual by enforcing a substantial religious commitment that he or she may not yet be able to meet, we feel, is irresponsible. Therefore, it is our position that the Sacrament of Baptism can, when the situation calls for special care, be conferred without any particular catechumenate training. Our tradition reserves the Sacrament of Confirmation for such occasions, preferring to leave the Sacrament of Baptism as an example of the freedom of Christ's love.

In keeping with this practice, parishes of the Holy Nicholean Catholic Church are prepared to offer the Sacrament of Baptism at every (or any) liturgy to anyone who wishes to receive it without any obligation whatsoever. 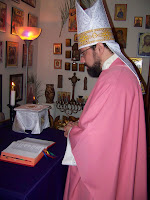 Today, on this special Sunday of Lent, the Church softens the discipline of the Lenten observances in order to remind us of the great joy that awaits us at the end of this symbolic desolation. The spiritual journey is a difficult and perilous one. It is wrought with dangers on all levels. Some have lost themselves entirely in the process. But for those who remain diligent and persevering, the mystery of Easter awaits us. And it is a mystery that will expand our spiritual awareness beyond the limits of our greatest expectation. Rejoice! Christ is in our midst!
Posted by Bishop Bryan D. Ouellette, Ph.D., SOSM at 9:48 AM 1 comment: